July 01, 2014
Budget carrier AirAsia Zest announced a super low promo fare offering as low as 10 Pesos base fare to all domestic destinations. Promo starts today until July 13, 2014. The travel period is from November 13 to March 31, 2015. Booking can be done online at www.airasia.com or through their mobile app available in Android, iOS, Windows and Blackberry devices. 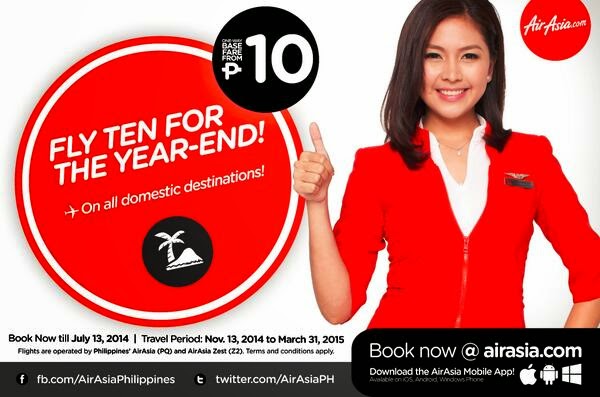 AirAsia Zest is the third largest airline operator in the country behind Cebu Pacific and Philippine Airlines.

Promo Philippines is a local blog focusing on aggregating promo announcements from various establishments in the Philippines including but not limited to airlines, malls, and online stores.

For those who wants to receive FREE promo notifications, please follow us through the following:

Popular posts from this blog

March 28, 2011
The low-cost arm of the Philippine Airlines , Airphil Express celebrates their first anniversary as they rebranded from the name Air Philippines last year. The move also signals the company's entry to the low-cost airline industry currently dominated by Cebu Pacific. Airphil Express (Photo credit: Wikipedia ) With the celebration in view, Airphil Express offers a new seat sale promo giving out as low as 100 Pesos base fare on all domestic destinations being flown using their Airbus A320 fleet, so likely that included their long distance trips like Manila to Cebu and Davao. The promo fares are up for grab until March 28, 2011. The travel period for this promo is from June 1, 2011 to February 15, 2012. Please take note though that the 100 pesos base fare does not include other charges like web admin fee, taxes, fuel surchage and other miscellaneous expenses. But compared to normal ticket prices (non-promo), it is way below that. In the end, you have saved much if you r
41 comments
Read more

February 05, 2013
Gokongwei-owned hotel chain Go Hotels announces a new room sale promo. The Bacolod and Dumaguete branches will offer their rooms for as low as 488 Pesos. The price is exclusive of Value Added Tax (VAT) but is inclusive of the following services: - Bed -TV -Aircon - Wifi Internet Access - In-room Safe - Towels and Shampoo Go Hotels latest promo - Click to ENLARGE The stay period for this promo is from June 1 to July 31, 2013 . Tickets can be purchased online at www.gohotels.com.ph . Please contact Go Hotels for other ways to book their rooms. Below are their contact numbers. The promo can be availed from February 5 to 11, 2013 or until promo rooms were sold out. Mobile: 63922-GOHOTEL (4646835) Land line: 6323988788 (Manila) About Go Hotels Go Hotels is a budget hotel chain operated by Robinsons Land Corporation (rlc), the property arm of John Gokongwei Summit Inc (JGS). JGS also owns Cebu Pacific, the largest airline in the country. Other hotel chains that operate simila
28 comments
Read more

January 12, 2016
Low-cost airline Cebu Pacific announced their latest promotion. They cutting half of the base fare for all their international* destinations. The travel period is from February 1 to May 31, 2016. The promo begins today and will last until January 14, 2016. *Except Australia. You can book your tickets online at www.cebupacificair.com .
4 comments
Read more